History of the Morgan County Courthouse 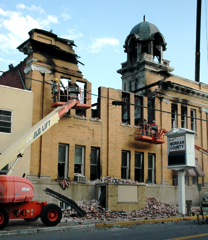 People want to remember. The now-charred ruins of the nearly century-old yellow brick structure mark the location of the civic heart of the county. All the records of official life from births, marriages and deaths to land and voting transactions were contained there. The records were thankfully saved by a vault room and lines of volunteers who passed them hand to hand from the fire ravaged interior to safe haven trucks.

The fire that swept the courthouse in the early morning of August 8 will live as a dramatic story but the years of civic activity are its true legacy.

The courthouse in Berkeley Springs, like in many small towns across America, is the seat of democracy, the temple of community life where everyone feels they have the right to enter and be heard. As such, its destruction impacts every citizen of the county. It is the visual loss that is the greatest however. Visitors have always been enchanted by the stately, neo-classic structure with its clock tower. Countless millions of glances have been sent skyward to check the time. There will be another courthouse built on the corner of Washington and Fairfax Street, but nothing can replace our memories.

The Morgan County Courthouse that burned in August was the third since the county was established in 1820 from sections of Berkeley and Hampshire counties.

The formation of Morgan County would seem a scandal if subject to standards of contemporary scrutiny. The powerful Sherrard/Abernathy clan with its lawyers and indomitable matriarch, Mary Abernathy, decided to solidify their control by urging creation of Morgan County with its seat in Berkeley Springs. Two years later, they graciously sold their stone house on the corner of Wilkes and Fairfax streets (where today stands the Berkeley Springs Antique Mall) to serve as the first courthouse. 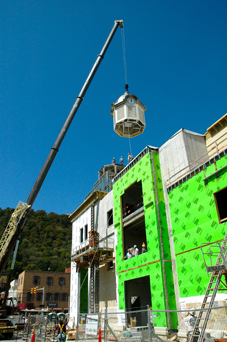 No longer would the County Court be forced to meet in the tavern operated down the street by Ignatius O’Ferrall. Nearly a quarter century later in 1844, a massive fire swept through the deteriorating main block downtown destroying 14 buildings including half the resort town’s hotel accommodations, a large structure once used as dance hall and playhouse, and the first courthouse.

Two years later, there was a land swap. The county sold the original lot back to the Sherrards for $600 and bought for the same price from the family the current courthouse location on the northeast corner of Washington and Fairfax streets.

Period pictures of the second courthouse show one in essentially the same, two-story configuration as the third except for a peaked roof and portico entrance. There was a belfry but no clock. News reports indicate the central place in community life the courthouse played. In 1883 it was reported that ”Sheriff Buzzerd has treated the Courthouse to a thorough cleaning, a new carpet etc., and it looks very respectable. We think the tobacco chewers should let up spitting over the new carpet for a year at least.” Nearly a decade later there was a move to upgrade the courthouse with some asking “why not sell the present Courthouse and ground and buy an acre or so somewhere within the town limits and build an entirely new courthouse building. Lay off the grounds nicely, plant trees etc. It would benefit town and fill the bill for a hundred years to come.” In 1900 the courthouse was enclosed with an iron fence. For the next couple of years, demands to upgrade or move the courthouse continued and in 1905 a committee of citizens decided remodeling was the answer.

The remodeling resulted in major changes to the profile. The roof was flattened, the portico removed and the tower cupola altered. A clock was inserted in the tower sold to the county by local jeweler P.R.Lawyer in 1908. According to newspaper reports, the clock had an illuminated dial and four faces of four foot diameter. When recovered from the 2006 fire, the clock faces were melted almost beyond recognition.

Built by .S.A. Westenhaver, the “newly remodeled” third courthouse opened on September 5, 1908. It was described as “light colored pressed brick with sandstone trimmings surmounted by well proportioned clock and tower.” A brick addition was constructed in 1923 and hardwood floors laid in the hall and lobby in 1930. Another addition was constructed in 1953. Traditional awnings were restored to the structure in 2002 as part of a recently completed renovation that connected various additions, added a new facade on Washington Street and made the facility handicapped accessible

The wide street in front of the courthouse has always been a center of community life as well. In 1916 it was paved and the current boulevard added. The following year, the plaza was planted with shrubs. Since then a variety of monuments and plantings have been added to the plaza area.

The last major fire in Berkeley Springs was in 1974 when the Hotel Washington and the block of commercial buildings next to it on Fairfax Street were destroyed. Across the street, the courthouse and its adjacent structures, were untouched. Not so, more than three decades later when once again fire left a gap in the civic life of Berkeley Springs.

The Completion of the Fourth courthouse, marks the restoration of the missed judicial and civic center to Berkeley Springs.